The Epagomenal Days and the Egyptian New Year 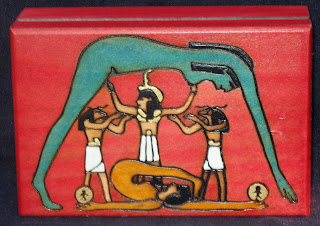 The Children of Nut
By Michael A. Starsheen
When Ra commanded Shu to separate his grandchildren, Nut and Geb, to create space where all things might live, Nut was heavily pregnant and about to bear her children, a new set of Gods.  Ra, still angry with his grandchildren laughed, and swore that Nut would not bear her children on any day in the calendar year.  Now, at that time, the calendar year contained 12 months of 30 days each for a total of 360 exactly, and Thoth, the God in charge of Time, was deeply disturbed by Ra’s pronouncement.

After much thought, Thoth went to his good friend, A’ah (pronounced Ay’ah), the eldest God of the Moon and timekeeper for the calendar.  He challenged A’ah to a game of draughts such that if he won, A’ah would have to give him an extra day for each round. The game became so intense that A’ah began to melt, and by the end, he became a part of Thoth.  Thoth was now the God of the Moon, marking time, and as such, may be shown with a crescent moon and full moon on his head. 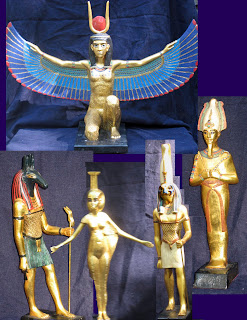 Archpriest Michael Starsheen
I am a Priest of Isis in the Fellowship of Isis. I was named an archpriest in 1996 by Lady Olivia Robertson, after achieving my hierophancy in 1995. I am also a Spiral of the Adepti perceptor, an archdruid in the FOI order of Dana, a knight commander in the FOI order of Tara, and an alchemical adept. Whew. I am a shamanic magician, a scientific mystic (talk about oxymorons), and general lunatic.